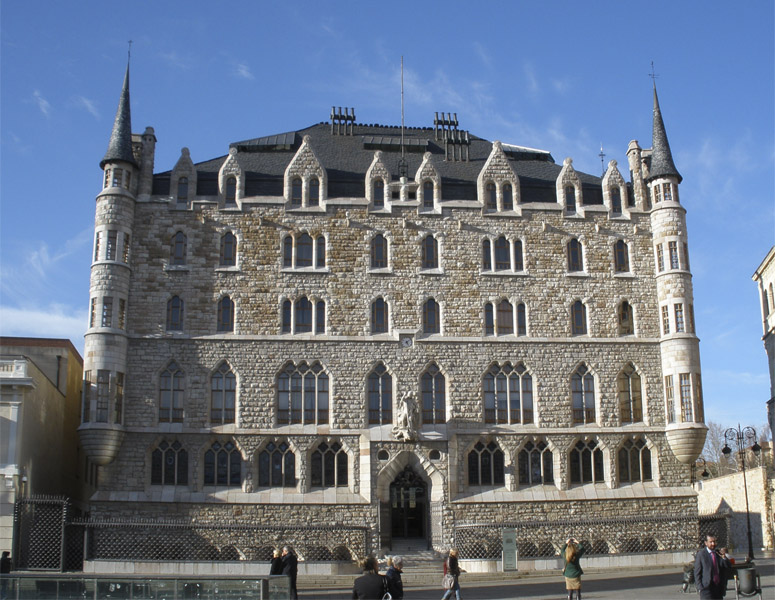 Posted at 12:52h in Places of interest by admin 0 Comments
0 Likes
Share

The Botines House, or Fernández y Andrés house, is a building of modernist style, located in the city of León, capital of the province of the same name, Spain. It was originally a commercial warehouse and private residence, and it was constructed and designed by the Spanish architect Antoni Gaudi between 1891 and 1894, this being one of his three works outside Catalonia, along with Astorga’s episcopal palace, also in León, and the so-called Capricho de Gaudí in Comillas, Cantabria. Located next to the Guzmanes Palace, headquarters of the Provincial Council of León, and next to Santo Domingo square, a meeting point between the city’s old quarter and the area of new development, of a Renaissance style, it was restored in 1951, and declared as Historical Monument in 1969. Currently it functions as the headquarters of Caja España, a financial entity which renovated it in 1996, an action that won the Europa Nostra award. The term Botines stems from the society founder’s surname, Joan Homs i Botinàs, Spanish businessman and trader settled in the city of León. The society was managed by Mariano Andrés Luna and Simón Fernández Fernández, who commissioned Antoni Gaudi to design the House. For further information: Casa Botines.